Railroads in Native America: A Biannual Exploration of the Impact of Railroads in Indigenous Communities 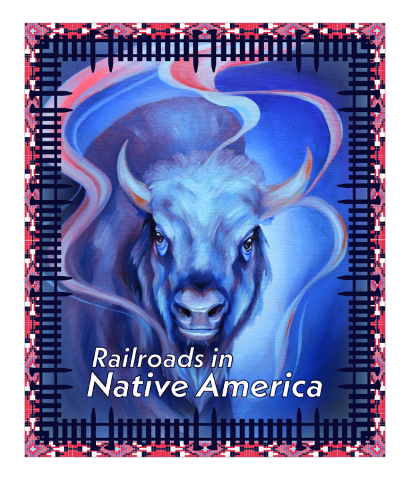 The 2022 Railroads in Native America Gathering and Symposium will be held on May 19-21, 2022 in Ogden, Utah at the Ogden Union Station. Utah’s official statewide railroad museum is located at the top of Ogden’s 25th Street Historic District.

The Friday and Saturday Gathering is free of charge. The Thursday field-trip is $75 and covers transportation, food and guide honorariums.

This gathering is a mask friendly event and ask everyone to be sensitive to our guests and speakers.

Registration will cover both online and in person participation. Visit the official 2022 Railroads in Native America Gathering site to register.

Railroads in Native America is a three-day symposium bringing together scholars, artists, musicians, tribal members and representatives from tribal governments, in partnership with the National Park Service, the Union Pacific Railroad Museum, and the University of Nebraska at Omaha. This year marks the 150th anniversary of the union of Central Pacific and Union Pacific railroad tracks at Promontory Summit, Utah. Union Pacific laid their first mile of track in Omaha, Nebraska and historic Mile "zero" is just across the river in Council Bluffs, Iowa.

This historic anniversary prompted the organizing committee to design a symposium that addresses the significant impact of railroads in Indian Country.

Chair: Manu Karuka, Barnard College
This roundtable will explore the root causes and motivations for the creation of a false narrative about California Indians, driven in part by railroad corporations. The attempts to make the railroad commercially viable were coupled with real estate speculation in California and the need to give California an identity outside of the “wild west” and “49ers” mythology that was prevalent in east coast literature.

Chair: Elaine Marie Nelson, University of Nebraska-Omaha
Railroad corporations are active participants in tourist industries across the American West, often deploying powerful imagery and ideas about Indian peoples to promote the region and their rail lines. These panelists will explore how railroad tourism of past and present exploits(ed) Indigenous peoples and cultures and distorts(ed) histories of colonization and dispossession.

“The Making of the Glacier Park Indians: American Tourism and Capitalism in the Blackfeet Nation”

Chair: Reed Robinson (Sičáŋǧu Lakota), NPS Midwest Tribal Liason
This first transcontinental railroad traversed the forty-second parallel, cutting through Indigenous homelands and forever altering the social, ecological, and economic environments along the route. Together, these panelists offer a diverse set of perspectives—drawing from historical research, family history, and artistic training—to assess the disruptions and legacies of change in this region.

“Native Americans and the Transcontinental Telegraph”

“Lakota Events During and After the Coming of the Railroad”

"Maintaining Our Identity, Beliefs, and Values Since the Arrival of the Ȟemáni"

Chair: Kent Blansett (Cherokee, Creek, Choctaw, Shawnee, and Potawatomi), University of Nebraska at Omaha
Railroad expansion is tied to Indigenous dispossession. These panelists address how corporate and government agents seized Indigenous lands and attacked Indigenous sovereignty in order to construct and operate rail networks. Native Nations dealt with the effects of railroad colonialism by using a variety of strategies.

“Tracks of Dispossession: Legacies of Railroad Allotment in Diné Bikéyah”

“The Influence of Railroads on Tribal Lands, Past and Present”

Chair: Desrie Valdez (Navajo), President, Union Pacific’s Council of Native American Heritage
This short documentary film enters the world of Navajo families amid history of railroad work through the lens of one workday on the 9001 Heavy Steel Gang.

Chair: Alessandra Link, Indiana University-Southeast
How did Indigenous individuals and Native Nations negotiate, resist, and/or capitalize on railroad expansion? Panelists discuss how Osages, Cherokees, Lagunas, Meskwakis, and others confronted the construction and operation of rail lines through tribal lands.

“ashkotewi-hi-myewi: The ‘Fire Road’ and the Meskwaki Nation”

“The Flower of Friendship: The Story of the Railroad and the Laguna Pueblo Colonies”

“The Infernal Swindle’: The Osage Nation, the Leavenworth, Lawrence, and Galveston Railroad and the Failed Sturges Treaty”