"Move Over, Sir!" Women Working on the Railroad 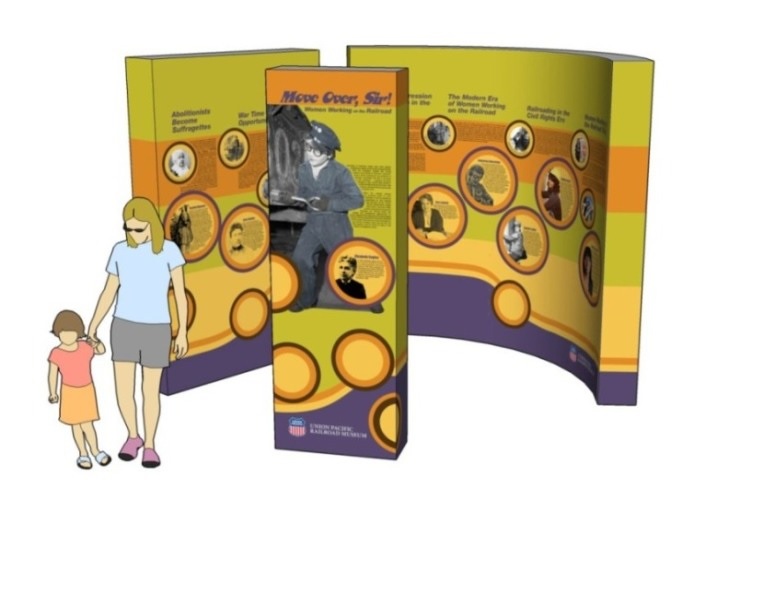 You can bring this exhibit to your venue!

Centuries of American history have seen gender wielded as a weapon to limit women’s opportunities within the workplace. Despite this, during wartime and periods of economic upheaval, women slowly transitioned into positions of authority, knowledge and skill in all areas of the workforce – including American railroads. In fact, women have served in critical railroad roles since the early 19th century, working to Build America right alongside men.

When the railroad allowed the American public to move westward, it not only opened up possibilities for men seeking their fortunes, but for women seeking opportunities outside of the home. In the late 1830s and 40s, telegraph lines expanded alongside new railroad tracks and created new professional opportunities for women, despite continuing social norms discouraging women working outside of the home and interacting with the public. Early pioneer women telegraphers were still the exception rather than the rule, but they blazed a trail for women to follow in the century of progress to come. 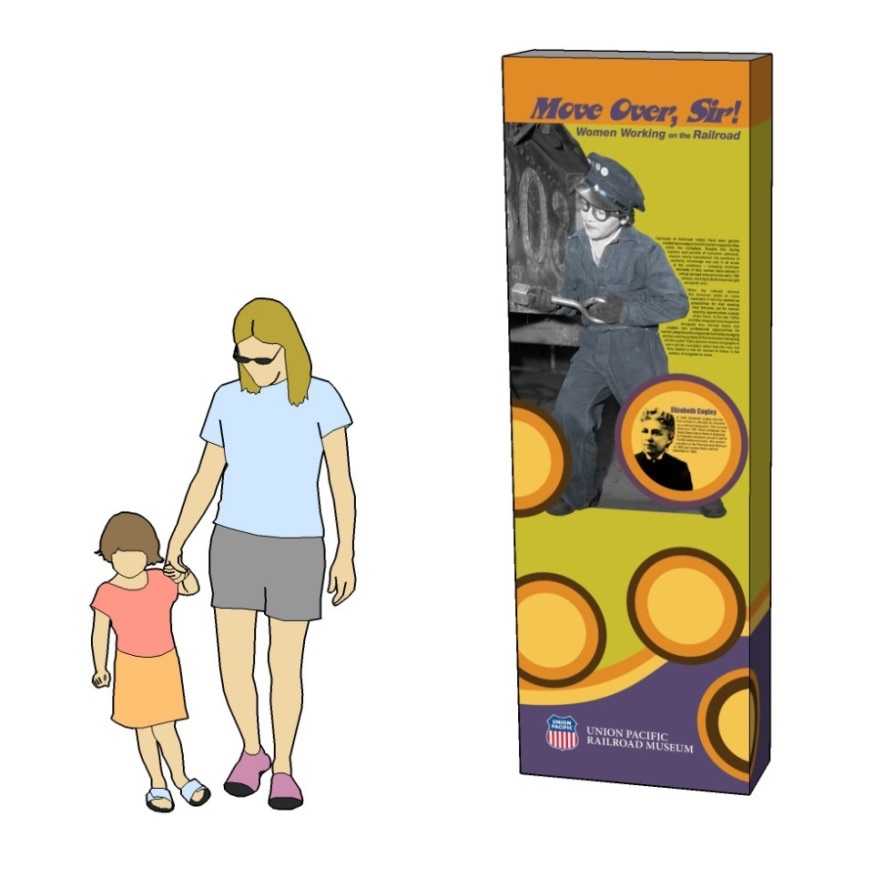 Using the same arguments for personal rights and freedoms as they did when fighting to end slavery, women abolitionists turned their efforts toward securing equal rights for women after the Civil War. Influential public speakers like Elizabeth Cady Stanton used their leverage and political connections developed during the abolitionist movement to contend U.S. women should not be treated as second-class citizens, but given the full rights and privileges of citizenship – including the right to vote and obtain financial freedom through the right to work. This work reached its peak in 1920 with the passage of the 19th Amendment to the Constitution, giving women the right to vote. It cannot be ignored that while these women promoted equal rights for women, they predominately were speaking about white women. There is no doubt this movement later helped the cause of all women fighting for equality in the workplace and in politics, but initially the impetus was not inclusive. Eventually, this movement’s effects began to offer hope to women of color, especially during the Civil Rights Movement in the 1960s.

Times of War Provided Women Opportunity to Work on the Railroad

Wartime presented all American women, regardless of ethnicity, with opportunities to stretch beyond the narrowly defined roles and expectations of what was considered “women’s work.” Wars tend to turn society on its head as every citizen is asked to contribute to the war effort. Women stepped in to fill gaps in the railroad workforce as men were called away to serve as soldiers on the front lines. During the Civil War, more than 100,000 women stepped up as men were drafted into the military. Many of these positions were as railroad telegraphers. When the war was over, women were expected to step aside as men returned from the fighting front, and a resurgence in public discussions about women’s proper place continued after the war. Railroads, however, were willing to retain female employees, perhaps because of their lower labor costs compared to men. This led to companies like Western Union specifically reaching out to train women for careers in the communication industry. A decade after the Civil War, it was no longer a novelty to see Caucasian women working on the railroad as telegraphers, station agents and ticket agents. These women managed complex operations and transmitted train orders to train crews. Through the dedication, service and bravery of these women, they earned the right to be respected members of the railroad workforce.

In the first nine months of 1918, the number of women working in the railroad industry rose 66% from 82,370 to more than 100,000. By the end of World War I in November 1918, more than 100,000 women were working in railroad jobs. While many were in an office setting or as a station agent, some pioneers worked in mechanical shops and along railroad right-of ways. Due to the overall lack of training in railroad careers, new methods were put into place providing women with comprehensive training alongside men, without having to spend years learning a role alongside a veteran railroader. This leveled the playing field considerably for women choosing nontraditional railroad roles. After the war ended and soldiers began to return home, women in these nontraditional roles were expected to give up their jobs, return to their lives at home and not compete with men for work. While many women stayed on as telegraphers and station agents after the war, even those jobs were dwindling as the nation neared the Great Depression era at the end of the 1920s. As the number of jobs overall declined, women in the workforce, and at the railroad, were expected to give up their jobs for their male counterparts.

This was also true during World War II, when women once again were called upon to enter the workforce to keep the American economy moving forward as millions of men were called to serve in the armed forces. By December 1941, when the U.S. entered the war, 13 million women were part of the American workforce. This increased to 20 million women by 1944, with 6 million alone working in factories. 250,000 women were working on American railroads by the war’s end in 1945, but this number dropped to just 122,000 by 1948 as women were again pressured to leave these jobs open to returning men.

The Great Depression Derails Women in the Workforce 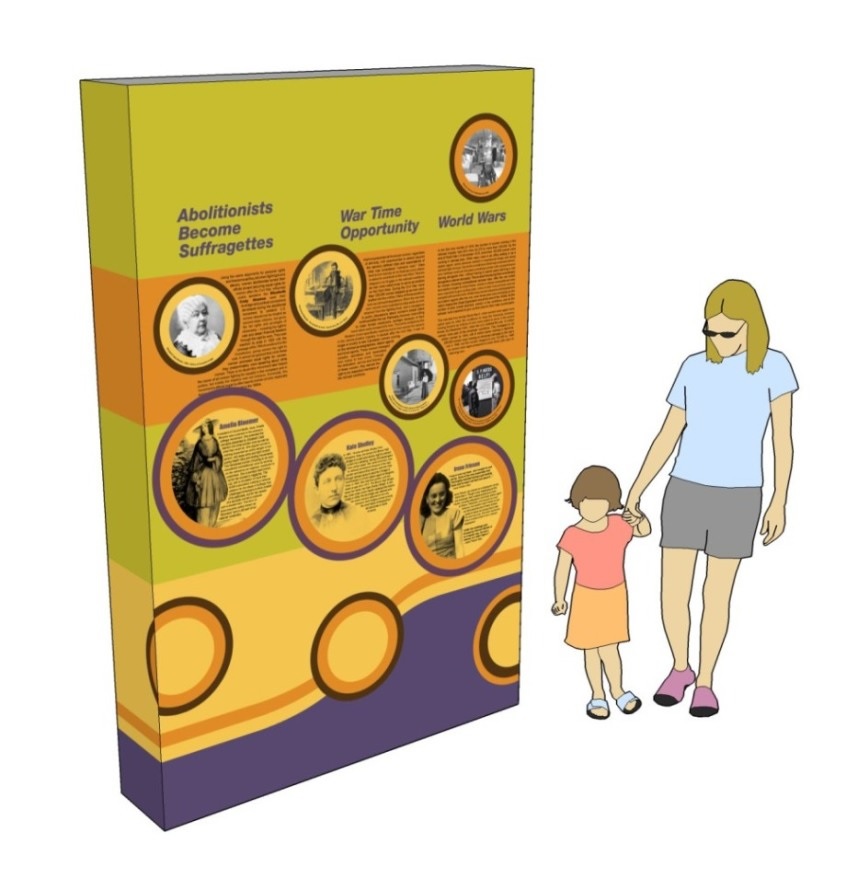 The 1929 stock market crash and the following Great Depression unilaterally impacted American society for the worse, undermining social progress achieved by women during the 1920s. Women had to fight societal pressure to keep their hard-won jobs because it was seen as selfish for them to take jobs away from men trying to feed their families. Ironically, women had the same goals and also were trying to feed their families during a trying economic climate, just like men. In spite of this, some women managed to retain employment during the Depression.

Union Pacific’s Challenger train set the new standard for coach travel, introduced in 1936 on the Chicago-to-Los Angeles route. UP President William Jeffers, who started as a railroad call boy in North Platte, wanted to provide a first-class experience for passengers who could not afford to ride UP’s luxury Streamliners. In 1935, he hired Avis Lobdell to ride the entire UP route and ask passengers what they most wanted in a train. Her research, derided as unnecessary by other railroads and even some UP managers, helped develop what became one of the most successful trains in UP history.

The Challenger’s mission was to offer outstanding service at Depression-era prices. Air-conditioning, dimmable lights and personal wake-up calls for each stop were some of the popular new services. Dining was simple but maintained a high standard, with three meals costing only 90 cents per day. Most notably, staff was specifically instructed to be friendly and helpful to passengers. These were new instructions for many passenger crew members.
During her research, the most important information Mrs. Lobdell learned was that women, comprising more than half of coach passengers, disliked the inconveniences of traveling alone or with only their children. To make UP more comfortable for women travelers, Jeffers created the Women’s Travel Department, placed it under the direction of Mrs. Lobdell and instructed her to hire nurses to assist single women, mothers traveling without help, and the elderly and infirm. These nurse/stewardesses were placed in charge of new women-only cars, where even the passenger conductor had to get permission before he could enter. The service was tremendously popular, and by mid-year 1936, some 39 nurse/stewardesses were serving on the Challenger and other trains. Hiring criteria were strict: candidates had to be a registered nurse and a member of the American Nurses’ Association, between the ages of 25 and 28, 5’3” to 5’7” tall, and weigh between 125 and 145 pounds. Most importantly, they had to be able to think on their feet and be independent enough to work with the otherwise all-male train crew. UP’s nurse/stewardesses served passengers until the U.S. entered World War II, when most reported for military duty.

The Modern Era of Women Working on the Railroad

With soldiers’ return from abroad, women were dismissed from their industrial positions nationwide. During the war, industrial companies and the government argued women could easily hold factory positions. Yet, after the war, women specifically were excluded from the industrial workplace due to their so-called physical limitations. This gender discrimination in hiring was characteristic of the idealized, nuclear society of the 1950s that relied heavily on gendered roles of acceptable behavior. Workplace discrimination against women who deviated from feminine careers was both socially acceptable and legal. The “homemaker” depiction of women replaced Rosie the Riveter as the ideal American women for this decade. However, a minority of women did not completely abandon railroad life, with many working their way up the chain to hold management positions at a variety of railroads.

Railroading in the Civil Rights Era

The 1970s was a tremendous period of societal change for the U.S. as the Peace Movement, civil rights and equality began to dominate the national conversation. Young, college-educated women were encouraged to enter the workforce and change organizational structures from the inside out. This led to dramatic changes in railroad employee composition. Whether this represented a specific desire to enter railroad work, or a general interest in employment, the 1970s represented the highest level of women working on the railroad since World War II. Many women were moving into “operational” areas of the railroad previously only held by men, including switchmen, yardmasters, brakemen and carmen. These positions involved physically rigorous, outdoor work. Women also were becoming highly qualified and technically competent electricians, dispatchers and locomotive engineers. This represented a significant change for women working on the railroad – from more clerical, communication jobs to operational work – as women continued to work in all aspects of the railroad.

Women Working on the Railroad Today 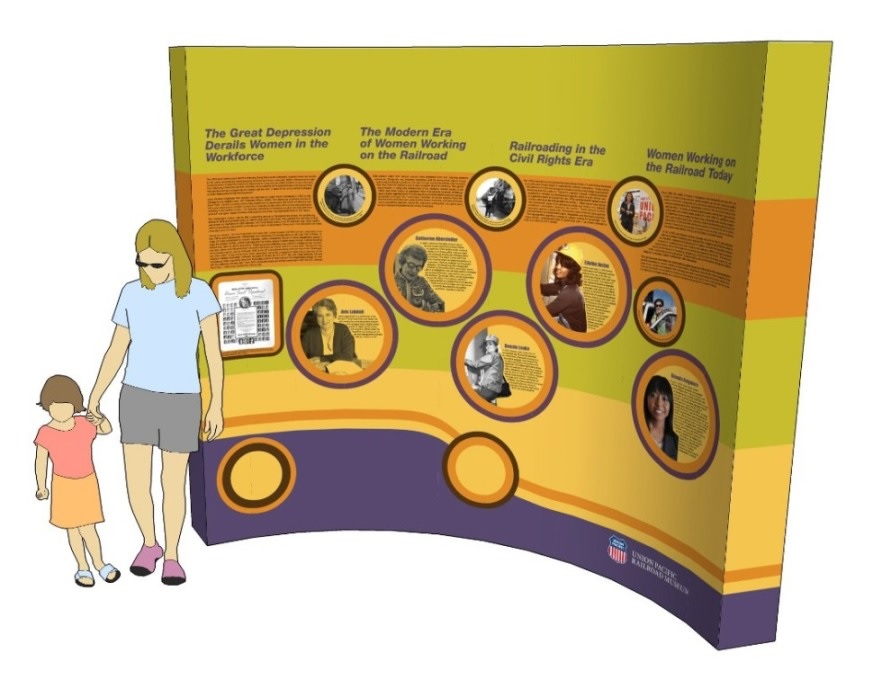 Since 2000, the number of women in management has increased by more than 30%. The number of women holding executive railroad positions has more than doubled as qualified women move up the management ranks into senior leadership. Minority women’s numbers also have doubled since 2000, representing more than 24% of all women working on the railroad today. The number of women in operating roles, including Train, Engine and Yard employees, has remained steady at about 3%. Union Pacific has undertaken a series of initiatives to entice women into these more nontraditional roles, including access to 24/7 care for family dependents, improving restroom facilities and providing streamlined scheduling. This enhances the working environment of everyone on the railroad, but has shown in research to be especially important to women as they continue shouldering the primary responsibility of family care of children or dependent parents.

At UP, LEAD (Lead, Educate, Achieve, Develop) has, for more than 10 years, dedicated itself to a mission of fostering an environment that increases opportunities for women to be recruited, engaged and developed as UP leaders; promoting and supporting initiatives focused on creating diversity and inclusion; and making a difference through professional programming, personal development, mentoring and community involvement. LEAD hosts year-round events focused on fundraising, philanthropy, STEM (science, technology, engineering, and math), community service and outreach, women's history, and work life balance, among other initiatives designed to increase women’s achievement within the railroad.

Through these and other initiatives, despite battling negative perceptions of their gender and sometimes restrictive societal expectations, women continue to demonstrate willingness to work on the railroad. Historically, during times of war, women demonstrated their knowledge and skill in positions critical to the nation’s infrastructure. That can-do attitude has resulted in a railroad workforce today where women can, and do, advance to all levels of leadership and responsibility as a valued and instrumental part of UP’s diverse workforce.