Union Pacific and the Pawnee Scouts 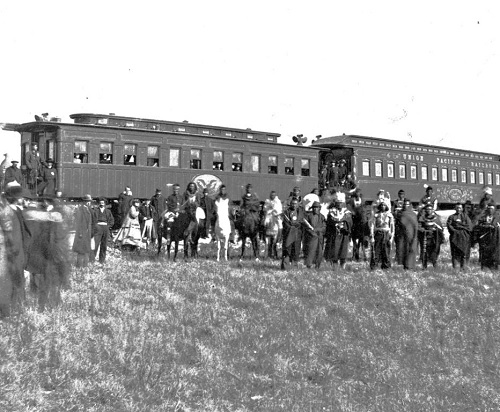 This photograph shows Pawnee warriors posed alongside Union Pacific excursionists in front of the business car that belonged to President Abraham Lincoln. The car had been used to transport President Lincoln's remains to Springfield, Ill., for his funeral and internment. Relics from this car are on display in the Union Pacific Railroad Museum.

Did you know that in 1864, several hundred Pawnee warriors joined forces with the U.S. Army? Friendly to the American government and bitter enemies of the Sioux, the Pawnee worked alongside the Army to protect Union Pacific as the railroad progressed into the Great Plains. Led by Major Frank North, a uniformed battalion of 800 Pawnee men patrolled the railroad to protect crews and livestock from Sioux and Cheyenne raiders. Their presence as a deterrent to attack was quite effective.

In October 1866, to celebrate the Pawnee Scouts' help in building the first critical miles of track into Nebraska, General Grenville Dodge invited Major North and the scouts to accompany a Union Pacific excursion. This excursion was full of media and investors from the East who were eager to see the progress of the railroad. The Pawnee staged mock raids on the passenger train, allowed the travelers to tour their camp and posed for pictures alongside the special train. Photographer J.C. Carbutt of Chicago, Ill., was paid by Union Pacific to document the event.

The photographs taken by Carbutt are called stereo cards, or stereographs, and were the 19th Century equivalent of 3D technology. Using a stereoscope to view the cards, viewers saw the images merged as one. The Union Pacific Railroad Museum has more than 800 stereo images documenting the progress of the railroad from 1866-1869. It's one of the largest collections of its kind in the world. The photographers represented in this collection include J.C. Carbutt, Charles Savage, Andrew Russell, Alfred Hart and William Henry Jackson.

For more information on the Pawnee Scouts you might try: